The South African real estate market has shown a remarkable recovery following the Deeds Office closure that occurred in the second quarter of 2020 and reflects nearly the same levels of activity as it had pre-pandemic.

According to Lightstone Property data, a total of 44,885 bond registrations were recorded at the Deeds Office over the period of October to December 2020. The RE/MAX National Housing Reports reveal that this figure is less than 80 registrations shy from the number of bonds that were registered in Q4 2019 and is a considerable correction on the mere 5,792 bond registrations that occurred during the hard lockdown in Q2 2020.

Of the 61,749 transfers, a total of 30,167* freehold properties and 16,288* sectional title units were sold countrywide (these figures exclude estates, farms, and land only transfers). The number of freehold properties registered decreased by a mere 1% YoY, increasing by 22% QoQ and showing a near full recovery from the 3,869 that were recorded in Q2 2020. Sectional titles showed an even faster recovery from the 1,105 registered sales in Q2 2020. The figure increased by 2% YoY and 28% QoQ. 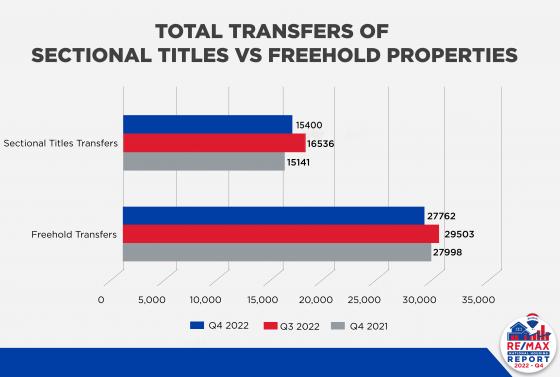 The RE/MAX National Housing Reports then reveal that, for the fourth consecutive quarter, the price of sectional titles* have dropped YoY. While Q4 is still slowly recovering from the R953,084 that was reported in Q2 2020 and has shown an increase of 2% when compared to Q3 2020, the figures reflect a 3% drop when compared to Q4 2019.

Lightstone Property data reveals that the average bond amount granted during this period amounted to R1,203,000. The RE/MAX National Housing Reports reflect that this is an increase of 8% since last quarter and of 8% since Q4 2019. 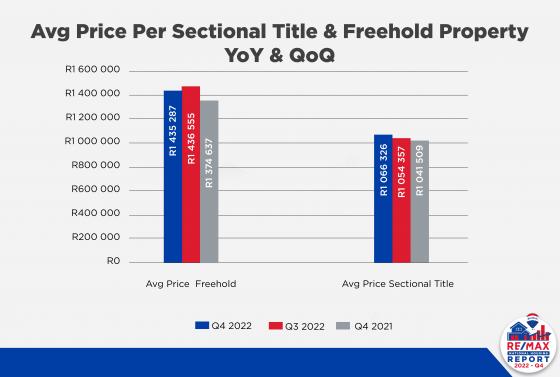 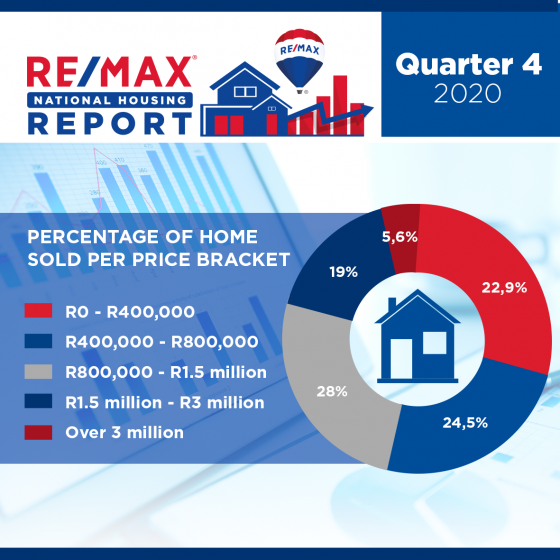 “In general, the increase in sales after lockdown in the metropolitan areas largely occurred within the middle- to lower-income markets: areas where people who rented before could now afford to buy. This in part explains why the R800,000 - R1,5 million market made up the largest proportion of transfers. Across the country there has also been an upsurge in the number of enquiries made by those who are searching to relocate to the coast now that they are able to work remotely, which could possibly explain why there was an increase in the number of transfers that occurred over the R1.5 million price point,” explains Regional Director and CEO of RE/MAX of Southern Africa, Adrian Goslett.

Final thoughts
“Despite the renewed activity and unprecedented recovery the South African property market has enjoyed in 2020, I predict that house price appreciation will remain low for 2021 as a result of the financial pressure many households will feel owing to ongoing economic challenges brought about by the pandemic. That being said, the 2021 market presents as many opportunities as it does challenges. Those who can afford to invest in real estate now will stand to make substantial long-term returns on their investment,” Goslett concludes.

*Figures according to Lightstone Property

Send to a Friend